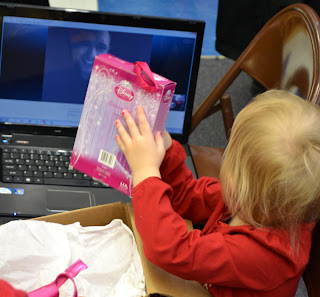 InterServ Early Care and Education Center at Mitchell Woods held its annual Christmas party for the young children Tuesday morning. It was much like any other Christmas, kids got together with their teachers, some in costume, and they all sang, or tried to, the songs that they learned earlier in the month.

The program began as scheduled with all toddlers and children getting in on the action, some more than others, and was performed virtually without a hitch. There were cookies, donuts and coffee for everyone to partake. The Christmas tree was full of gifts donated to the children by Ashland United Methodist Church and it was hinted that Santa was to arrive after the program was over to hand out gifts.

Now everyone in the room that morning, parents and children alike, knew Santa was the one special guest they were anxiously awaiting. To Charlotte—“Charlie,” to the rest of the group—Benner, though, Santa was OK and all, but not at the top of her list. You see, Charlie had a special guest all her own and he had appeared at the start of the program - from halfway around the world- to watch her sing.

Her father, Brenton Benner, is stationed in Afghanistan and was her special guest, via the internet, at the Mitchell Woods Christmas Party. Brenton, through a laptop computer propped on a chair, was able to watch Charlie perform her portion of the program. He was also able to see her receive her gift from Santa and open it. Charlie proudly displayed her present for her father, sharing the Christmas spirit with him despite his distance.

It is a yearly tradition at Mitchell Woods to gather together in this time of festivities and sharing, to catch a glimpse of that special guest in the red suit, with the long flowing white beard at which the kids marvel at. But to Charlie, Santa was just “OK.” Charlie knows that her “special guest” will always be with her, not just on one holiday of the year, but every day, in some way. In this case, it just happened to be through a laptop computer.
Posted by Kinger at 4:56 PM No comments: 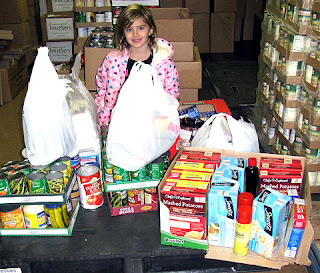 As young people go through their school day, most of them are thinking about what they are going to do when they get home, what their parents are going to have for them to eat, or when their favorite television shows are on. 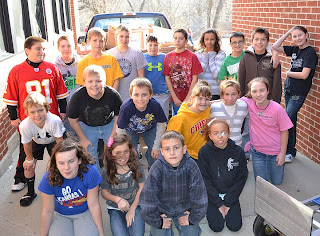 So when InterServ was the recipient of a number of items for its Calvin Center Food Pantry, the guess was that it was from a church or local organization that does food drives on a regular basis. But that was not to be the case, receiving those food items from some young minds thinking not of sports, television or parents, but how they can help others.


In one instance, a former InterServ employees' granddaughter conducted her own food drive and donated the items to the Calvin Center Food Pantry, while Pershing, Skaith and Parkway elementary schools in St. Joseph helped as well, all recently conducting school wide food drives for InterServ, providing much needed non-perishable items to aid those in need.


InterServ is thankful for every item of food that it receives through various food drives, and some drives are bigger than others, but as we see with these young minds in action, it's not the size of the truck or boxes, it's the size of the people who organize, donate and think of others that matters.