One of those calls

While attending a short seminar earlier this month, I heard an assistant principle at a local school district explain to those in attendance that he instructs his staff to treat each phone call that is considered a "complaint" to be an opportunity for his organization to get better.

We receive some of those calls at InterServ, but the call that the Southside Youth Program received last week was disguised as something much different.

Dennis Snethen, the Director of the SSY and head coach of the Wesley Weightlifters, fielded that call after three of our lifters were pictured in the St. Joseph News-Press. The three ladies were pictured as part of the News-Press' SportsZone section, a section that focuses on youth and children sports and appears every Monday.

The person who called Dennis after seeing the pictures started the conversation with - "Are you the one who runs the weightlifting program?" Immediately, Dennis thought the worst. The caller referenced the News-Press photos and followed up with - "How come that little girl does not have a uniform?"

You see, one of the three girls pictured in the News-Press wasn't dressed in a weightlifting singlet while the other two were, thus triggering a reaction from the caller that, at first thought, might seem as a complaint or a phone call that might not be well received.

"I want to donate some money to buy that girl a uniform," the caller said humbly.

After a short explanation by Dennis to the caller that the girl without the uniform owns more than one, but doesn’t like to wear them, and that particular weightlifting meet did not require lifters to wear singlets, so she decided not to, the phone call turned out to be a blessing, not a complaint.

You see, even though nothing physically or structurally changed on either end of the phone, the blessing is that there are people out there who are willing to pick up the phone for the betterment of their fellow person.

After taking the call, Dennis felt better the rest of the day. And after hearing his story, so did I.
Posted by Kinger at 9:34 AM No comments:

A Great Week for a Food Drive!

This was a great day for our food pantry. Skaith school finished up their week long drive, bringing in over 600 items. The youth who coordinated this event deserve a big THANK YOU!
In addition, Heartland Comprehensive Family Care Center held a 3-day drive and filled a truck and an SUV with approximately 3,000 items! Thank you to everyone who helped make this event a success, and congratulations to Dr. Wiederholt's team for winning the friendly competition!
The generosity of our community never ceases to amaze me. The thing that sets InterServ apart is its partnership with the faith community. People meet God in their interaction with the poor and vulnerable. Seek justice, love mercy, walk humbly with your God!

The Joy of Giving 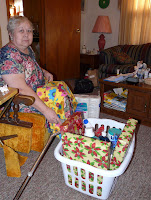 Our Adopt-a-senior project is off to a great start. Ten of our seniors have already been adopted!!! Each person calls with excitement and joy in their voice as they make their request for the name of a senior to adopt. One woman got her church women's group excited about it and they adopted a total of four seniors. The needs are simple: a new nightgown, slippers, coffee, sheets, bookends, and something almost all the lists have on them: cleaning supplies.


Have you made plans to help someone else this holiday season? If you haven't, drop me an e-mail lpiper@inter-serv.org. I will be happy to connect you with a senior who needs help. Have a joyous day!
Posted by Laurie Piper at 1:20 PM 1 comment:

The holidays are sneeking up on us! Before we know it, Thanksgiving will be here. November begins InterServ's Adopt-A-Senior Project. Many of the people we serve have very low income and lack resources they need to purchase even the most basic of items. You can help brighten the holiday for someone by adopting one of our seniors. Simply give us a call (816-238-4511 Ext. 29) or drop us an e-mail (lpiper@inter-serv.org) and we will give you a list of needed items for which you can shop, wrap, and return to be delivered by our staff. If you prefer not to shop, you may choose to sponsor the food cost for one of our seniors on the Mobile Meals waiting list. Your gift feeds homebound seniors and provides a wellness check by dedicated volunteers.
What do our seniors say about these projects?
"Mobile Meals are wonderful. I know I am getting a balanced meal when I eat these meals. That means I will get well soon and be up on my feet again."
"When you brought in the Christmas gifts, I couldn't believe my eyes. It's like - yes Virginia, there is a Santa Claus."
Will you help brighten the holidays for one of our seniors?
Posted by Laurie Piper at 7:04 AM 3 comments:

Halloween - All-Hallows Eve - costumes for the kids and all the fun and games that go along with this national day. And oh, I almost forgot, a Kansas City Chiefs football game on television. All the makings of a great night, or in my case, one that haunts you.

It seemed headed for a good one while walking along with some friends and their kids as they trick-or-treated the local neighborhood. We headed down to a local church, whose congregation gathered for an annual treat in which they decorated the trunks of their cars or the beds of trucks and passed out candy to anyone who came by. It has been going on for years.

A good ole’ fashioned church Halloween, and a way for the congregation to get people to come to the church, pass out literature and possibly connect with the community on a more personal level.

You had the decorated grave yard in a fairly-new Capri trunk and its owner handing out Kit Kats, a strobe-lit casket in the back of a Chevy, complete with Snickers - all the makings of a church outing that helped bring out the best in people.

Then we came across the final car in line. After a read of its sign and a double-take of the occupants in the trunk of the vehicle, it struck me as more than odd.

Two young adults, raggedly dressed with mismatched shoes and socks, holes in their jeans and gloves, happily addressed the children with candy and suckers surrounded by six boxes outside of the vehicle with written signs on them.

I watched them for about five minutes while our little trick-or-treaters made their way through the maze of cars and the faces of the men I have seen at Community Missions Corporation (Juda House and St. Joseph’s Haven) came back to me quickly as did the thought of how hard CMC and its sister organizations in St. Joseph work to bring this issue to an end.

I know what St. Joseph does for the homeless, it is a great work in progress. But the thing that haunted me the rest of the evening is that fact that I am not as educated on the plight of the homeless as I want to be in order to help fulfill the mission of CMC. And after further review, I am guessing that neither were these two young people, hanging out the back of a perfectly good car, giving away treats and candy to kids in the parking lot of a church.

And since all they were doing was passing out candy, “dressed” as homeless, I can fairly say they were not advocating for those men and women in that situation. No literature to pass out about the homeless, no brochures or newsletters from those organizations that aid these people, just sitting there in their car, enjoying Halloween.

But, to be fair, giving them the benefit of the doubt, they are probably smart enough to know that whether it be in a car to shelter them from the elements, candy to eat, or at church to hone their faith, any homeless person would be dying to be in their shoes. And some probably did that very evening.
Posted by Kinger at 10:46 AM No comments: